‘ROOKIE OF THE YEAR’ COLAPINTO SHINES IN ABU DHABI

Up-and-coming racing star Franco Colapinto wrapped up a remarkable season in the Asian Le Mans Series with a spectacular fight to the finish line in Abu Dhabi. The 17-year old from Argentina made a huge impact on the sportscar scene in his LMP2 debut with G-Drive Racing by APR.

Bullet Athlete Franco Colapinto arrived at Dubai with only two full seasons of junior single seater experience under his belt. The 2019 Spanish F4 Champion experienced a week of firsts – it was his first endurance race, his first race in an LMP2 car and his first time racing on the Asian continent. It didn’t take long for the teenage sensation to make himself comfortable in the 600bhp Aurus 01 machine.

Although some issues stopped the young Argentine from converting the pole into a maiden victory, his raw speed and solid performance didn’t go unnoticed. He set the fastest lap in both 4H of Dubai races and finished on the podium on Sunday alongside his teammates Rui Andrade and John Falb.

Due to a condensed calendar, the 2021 Asian Le Mans Series season commenced this weekend in Abu Dhabi. Once again, Franco was in charge of the #25 G-Drive car for the Qualifying, and the youngster did not disappoint. He claimed his third consecutive pole position and qualified second for the season finale, only 0,06s off the pole time.

Despite the G-Drive Racing by APR team’s best efforts, the #25 squad was thwarted by bad luck in Race 1. They lost out to a poorly timed full course yellow and started losing straight line speed halfway through the race. It didn’t stop Franco’s team from claiming their second consecutive podium finish in three races.

Race 2 was off to a great start with the car running much faster. Again, interrupted by several safety car periods, causing the #25 car to drop down to P4. Franco took control of the car at the halfway mark and carved his way up to the lead. Unfortunately, later on they were hit by a drive through penalty for speeding in the pit-lane but, this didn’t stop Colapinto from providing fireworks in the closing stages of the 4-hour race. He jumped back into the car with a 48 second deficit to the leader, chased down Kelvin Van Der Linde for P2. The 17-year-old then found himself up against FIA F2 podium finisher Sean Gelael and started a spectacular charge on the JOTA driver. After 240 minutes of racing, Franco crossed the line in second place only 0.4 seconds off the lead car in a nail-biting finish.

‘’ It’s really disappointing to lose the race by 0.400 after 4 hours of racing and so much effort from all the team. “ – said Colapinto. “We were in a good strategy to win the race but we got a drive through, then I jumped in the car and gave my best to close the gap but it wasn’t enough. I know that our time will come. I can’t thank enough to G-Drive Racing and Algarve Pro Racing for their amazing job in the past two weeks, and to my teammates Rui (Andrade) and John (Falb) who did a fantastic job as well. “

Stewart Cox, Team principal, G-Drive Racing by APR:  “Franco was out of this world throughout the whole Championship, marking himself out as an immense talent to finish second in the last race and put up a really good fight for the win that went to a nail-biting finish. Phenomenal!”

Franco now heads back to Europe to continue the preparation for the main part of his 2021 season. His racing programme will be announced in the coming weeks. 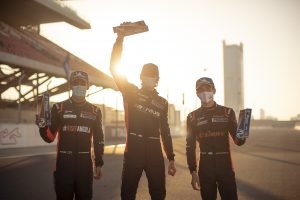 Bullet Athlete Ferdinand Habsburg started the 2021 Asian Le Mans season with a clean sweep, finishing both 4H of Dubai races on the top step of the podium with G-Drive Racing by Algarve Pro Racing. The Portugal based team’s second squad featured Franco Colapinto and Rui Andrade finished in P2 on Sunday. 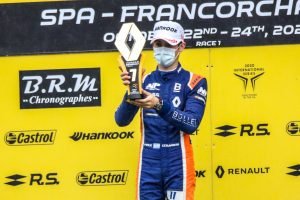 Bullet Athlete Franco Colapinto stepped up to Formula Renault Eurocup for the 2020 season following a dominant championship victory in FIA Spanish F4 and, despite it being his debut year in the series, he took race wins, podiums and fastest laps to finish third overall and first of the season debutants.