The 2022 FIA Formula 3 season commenced last weekend at the Bahrain International Circuit with Bullet Athlete Franco Colapinto on the grid.

Argentinian rising star Franco Colapinto made his debut in the third-tier of the single-seater pyramid. He joined junior single-seater royalty Van Amersfoort Racing, the latest addition to the FIA F3 grid.

Colapinto introduced himself to the worldwide F3 audience in the best possible way by storming into pole position in his and VAR’s first-ever FIA F3 Qualifying. The ROFGO Junior driver was on the pace throughout the entire session and launched himself to the top of the timing sheets with five minutes on the clock, where he stayed unmatched until the chequered flag fell, claiming a front row start in Sunday’s Feature Race.

The Sprint Race on Saturday came to an early end for Franco after an incident at the start forced him to make a pitstop to replace the front wing, while Rafael finished in P16 after some exciting battles in the mid-field.

The FIA F3 Feature Race took place on Sunday under the watchful eyes of the F1 paddock.

Colapinto took a lightning start maintaining the lead fending off beautifully from third-year FIA F3 driver Roman Stanek. Following an incident in the opening lap, the safety car was deployed. Still, the Argentinian rookie managed the restart perfectly, controlling the field once again ahead of the highest returning driver from last year, Victor Martins.

Franco managed to withhold the pressure coming from behind for 15 laps, but with higher degradation than his competitors, it was difficult to keep the more experienced Frenchman behind and he slipped back to second. However, the young Argentinian didn’t go down without a fight. Meanwhile, whilst fighting with Martins, Prema’s Arthur Leclerc closed on the leaders, with a significant advantage in pace. Colapinto`s tyres were too far gone to be able to defend. Finally, Franco crossed the line in third place, but he got demoted to fifth due to a time penalty for track limits.

With the ten points for P5 and the additional two points for pole position, he now sits in P6 in the drivers’ standings and skyrocketing VAR into fifth place in the teams’ classification.

“What a weekend. First of all, huge thanks to Van Amersfoort Racing for their trust in me and providing me with a mega car. We showed everyone what we are capable of. It’s such a competitive field, and even though I feel very comfortable in the car, I still have some catching up to do on experience against the other guys out there. Claiming pole position on my and the team’s F3 debut felt incredible, and I enjoyed the battles in the feature race. We left Bahrain with a good haul of points in the bag, and we are ready to go straight back to work in Jerez and Barcelona to prepare for Imola, a track I know well. Thanks to Tom (Claessen, Team Manager Van Amersfoort Racing ), Frits (Van Amersfoort, Owner VAR ) and the entire team, to ROFGO Racing, Bullet Sports Management and my home country Argentina for allowing me to be where I am now and to all the fans for the overwhelming support. “ 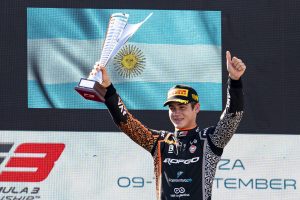 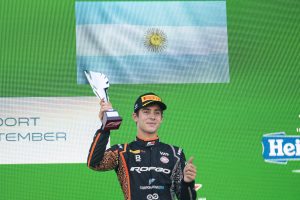 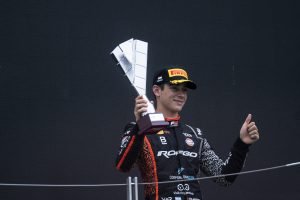 COLAPINTO CELEBRATES ON THE PODIUM AT THE HUNGARORING